Don’t have an Apple Music subscription?  No need to fret anymore!  OVOSOUND Radio tweeted (so get a Twitter if you don’t have one – that ish is free) that they will be making a stream available!

And the time got pushed back to 7:45PST! 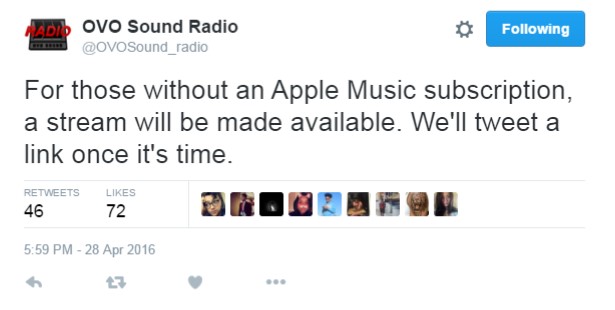 Heyyyyy yinz.  You may be wondering why (or maybe not) I haven’t written anything yet leading up to Drake’s album release on Friday.  To be honest, I haven’t been inspired by anything.  Sounds odd, I know, but I truly don’t know what to write.  It’s actually sort of bothering and baffling me I haven’t done anything creative each day.  I think I’m just really excited for a new album from Drake so that’s where my energy is.  Speaking of that album… ONE more day until we get to listen!

Well that is if you have Apple Music.

If you want to truly be one of the first to listen to Views From the 6, I suggest you sign up for Apple Music.  Tomorrow night is the 20th episode of OVOSOUND Radio, and that’s where Views will be premiering.  Listening times here:  10PM EST and 7PM PST.  Also during this episode is an exclusive Drake interview with Zane Lowe.  So be sure to tune in to Beats 1 on Apple Music tomorrow, April 28!

I’m also a bit overwhelmed with all of the Drake news we received this week, so I’m just taking it all in.  From tour date announcements to updates to OVOSOUND Radio to ticket prices and what’s the best spot, not wanting them to sell out, blah blah blah, I’m processing it all!

And JUST released by way of a Tweet from Drake is the official tracklist! 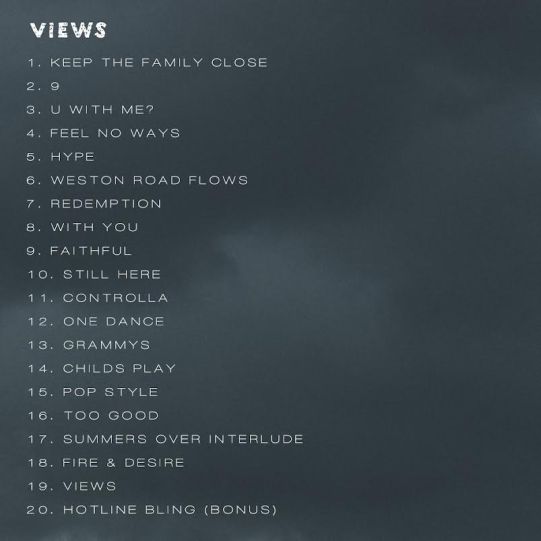 Hi, everyone! My name is Sara, but most of my friends call me Serge. Passionate of all things digital, I wanted to create an online space where I could share my California and Pittsburgh experiences and love for hip-hop music with you.
Join 2,689 other subscribers