It has been a busy last few days filled with concerts, and I am not mad about it for one second.

Last night I attended the third night of the concert series that make up the BET Experience.  The lineup below –

We missed Lil Yachty but got there just in time for Thugger.  Staples Center wasn’t completely full yet so the crowd wasn’t as lit as I expected for Young Thug, but he played a handful of his old and new tracks, keeping the audience satisfied.

Time for Migos.  I just saw them last Friday as one of the openers for Future, and once again they did not disappoint.  I truly think they are the top hip-hop group in the country right now – from the success of their Culture album to being featured on numerous tracks and making appearances across the board – they’re everywhere.  Talk about living your best life.

Can we also talk about how TakeOff needs to take off his pink windbreaker situation and give it to me?  And I don’t even wear pink, but it’s everything.  Photo cred: Staples Center Twitter 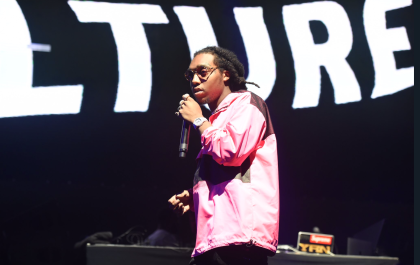 Next up was Rae Sremmurd.  Now these two guys really had the crowd lit.  From “No Flex Zone” to “Black Beatles” to “Swang” to “No Type” and more, Swae Lee and and Slim Jimmy elevated the energy inside the Staples Center.

Now I was pretty excited to see the next rapper – Gucci Mane.  Last night was the second time I’ve seen him live – the first was at Rolling Loud in May.  But to see him at Staples Center in a more controlled environment compared to a chaotic outdoor music festival was much more preferred. He performed “Both,” “Lemonade” (one of my favorites), and brought out Migos to perform “Slippery” in addition to a handful of other songs.

The last two acts were ScHoolboy Q and A$AP Rocky.  Now I thought A$AP would be the headliner, but the two rappers actually started on stage together.  I was all the way down for that.

Wiz Khalifa and Snoop Dogg took this approach Thursday night.  They alternated stage time and performed together.  This kept the energy going and held your attention as a fan.  V smart.

But nothing, and I mean nothing, could have prepared me or the rest of Staples Center for the final song.  ScHoolboy came back out with truly only a few minutes to spare until their ending time of 11:30PM.  He took to the mic saying this next song was to those from Compton, Carson, Gardena, etc (Los Angeles cities for those yinzers reading this), and “Humble” started playing.

Everyone knew what this meant…

For the three minutes Kendrick was on stage, the energy was at PEAK levels.  I almost told my friend who was there with me that we should leave a little early to get ahead of the crowd, but I’m so glad we stayed until the end.  The entire A$AP Mob and TDE family rushed the stage and everyone was living their best life.

You can watch snippets from the concert below!

Okay, time to go get some sun and then get ready for the 2 Chainz concert tonight!