Heyyyy, fam.  Lots going on this week in the hip-hop world.

First we have a Mr. Chris Brown making an appearance in Hermosa and Manhattan Beach.  Why does that area sound so familiar?  Well, I live there.  Technically in Redondo Beach, but I’m legit a mile from Hermosa and when I do venture out in the South Bay, that’s typically where I go.  He was there filming a music video for what is sure to be everyone’s new summer dance anthem called ‘Paradise.’  Chris Brown is a feature on this song, as Benny Benassi is the lead.

This song follows the duos 2011 collaboration ‘Beautiful People’ off of CB’s album F.A.M.E.

Now let’s talk about this HOT 97 Summer Jam lineup.  I’ve actually been seeing a little negativity about the lineup on Twitter but to me I think it’s pretty lit.  If I was in New York, I would definitely look into purchasing tickets.  I really need LA to host something like this!  Yes, you have Power 106 and Real 92.3 doing their yearly big concerts, but I’m talking a MAJOR concert lineup held at like the Rose Bowl.  Who knows, maybe one of these stations will host something at the new Rams stadium once built.  That would be dope.  Lineup below.  What do yinz think? 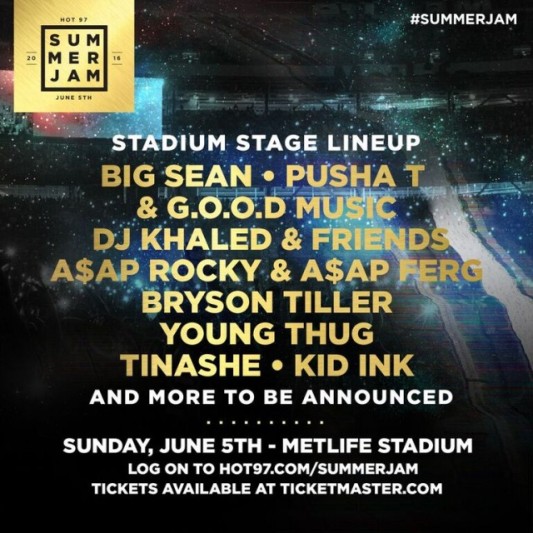 This remix though.  If you watched me premiere it to myself on Snapchat last night, you already know how I feel about it.  The song features August Alsina, Miguel, and Trey Songz.  Do you think Chris Brown will get some other R&B artists for a third remix? I say keep them coming!

And finally, start your weekend off with some ‘Trap Vibes.’  Meek Mill hops on to do a freestyle of Drake’s ‘Summer Sixteen’ and Desiigner’s ‘Panda.’  The song dropped just a few hours after Drake dropped ‘Pop Style’ and ‘One Dance.’  Coincidence?

That’s all for today!  Have a good one, yinz.  I’m off to the LA Beer Fest tomorrow – drink up!