I know I promised this post Monday night, but #fail on my part and it’s here two days later.  There has just been a lot of things happening fam.

So for a quick recap of this past weekend —

#DenimDenimDenim | On Saturday night about 35 of us rolled deep in denim for our annual denim-themed event where we all dress in denim (obviously) and bar hop in Long Beach by way of Big Red (a double decker giant red bus).  I purchased my outfit that morning (see below) and in addition to denim, I had to rep the late Notorious B.I.G. as it was his birthday.

One word to describe the night?  Reckless.  Seriously it was one of the most fun nights I’ve had in a while and definitely my favorite denim to date.  I won’t get into exact detail of our shenanigans (that’s actually the name of one of the bars we went to), but let’s just say everyone was loving each other and the beverages were flowing.

Long Beach Pride | Then bright and early Sunday morning, I woke up to be part of the annual Pride celebration in downtown Long Beach with my good pal Chaddy boy.  I’ve never been to such a thing, but it was truly great seeing everyone so accepting of one another and PROUD to be who they are.  It was a long (& hungover) day, but it was all worth it, especially to see Chad so happy.  #HappyPride #hearts 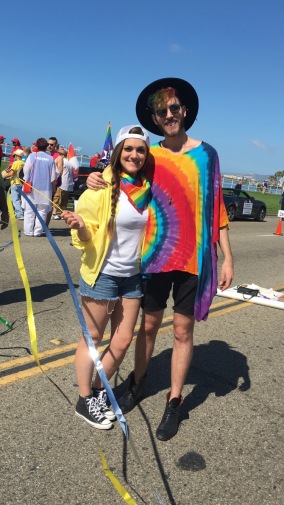 While it doesn’t seem like much, a lot was going on over the weekend not only with my plans but in the music world as well.  Stay tuned for a post coming soon (not putting a day on this in case I #fail again) featuring new music.

Hope yinz are having a good week!